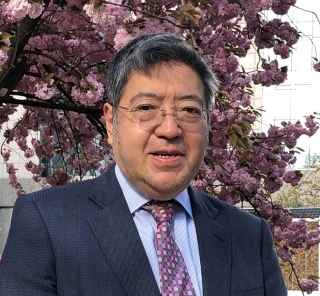 It has been over a year since I arrived in Brussels in October 2020.
In the latter half of 2021, Europe hosted many international conferences such as G7, G20 and COP26, providing many opportunities to promote the Japan-EU relationship in various fields despite the difficulties caused by the ongoing COVID-19 pandemic.

First, the EU announced its “Joint Communication on the EU Strategy for Cooperation in the Indo-Pacific” in September 2021. The Communication expresses the EU’s strong will and outlines specific measures for their engagement in the Indo-Pacific. I truly welcome this announcement. This great achievement occurred after the then Foreign Minister Motegi attended the EU Foreign Affairs Committee in January last year.
In November 2021, the EU introduced the “Global Gateway”. This is an extension of “The Partnership on Sustainable connectivity and quality infrastructure between Japan and the EU” agreed between Japan and the EU in 2019. We would like to make efforts to realize a joint infrastructure project with transparency, openness, and sustainability in mind in Asia as well.

(1) Developing leading projects worth 100 million USD to transform fossil-fuel-fired thermal power into zero-emission thermal power, mainly in Asia, through the Asia Energy Transition Initiative, maximizing the introduction of renewable energy.
(2) Providing up to 10 billion USD in the coming five years, which would include our contribution to the launch of Innovative Financial Facility for Climate, in addition to Japan’s contribution to provide support worth 60 billion USD that Japan announced last June, in order to lead the initiative in fulfilling the financial goal of climate finance that developed countries are collectively committed to the 100 billion USD per year.
(3) Doubling Japan’s assistance in the field such as disaster risk reduction for contributing to climate change to approximately 14.8 billion USD, both in public and private finance to 2025.
(4) Providing financial assistance approximately 240 million USD for the forest sector in the world.

Japan and the EU launched a “Green Alliance” since they share the goal of achieving Carbon Neutrality by 2050. In order to realize this goal, we will work together to lead the efforts of the international community to build back better after the pandemic. Both Japan and the EU share this common goal and Japan appreciates the EU for its efforts in the area of climate change.

In addition, it is essential to promote safe and secure cross-border data distribution in the digital field through enhanced security and privacy. For this purpose, I would like to continue the Japan-EU cooperation on "Data Free Flow with Trust (DFFT)" and continue discussions towards the conclusion of the Japan-EU Digital Partnership Agreement. The EU would like to conclude a wide range of digital partnerships with Japan, which is an urgent issue as well.

Regarding the COVID-19 pandemic, we have been able to effectively combine Japan's “Last One Mile Support” and the EU’s contribution through COVAX and other means to support developing countries.

In the latter half of last year, despite COVID-19 restrictions, we had many high-level meetings including Commissioner Breton’s visit to Japan, telephone talks between Prime Minister Kishida and President Michel, as well as President Von der Leyen, and the Japan-EU Business Roundtable. Besides, I visited the European Parliament in Strasbourg for the first time. I personally believe it is important to strengthen our relationship with the Members of the European Parliament, which is why I was glad to have the opportunity to visit.

In the first half of 2022, France will hold the rotating presidency of the Council of the EU.  The French government announced that the Indo-Pacific region would be one of its priorities. Along with cooperation in the Indo-Pacific region, we would like to further deepen the Japan-EU relationship in the Green and Digital fields under the French presidency as well. Last but not least, we cannot strengthen our Japan-EU relationship without cooperating with stakeholders who are engaged in Japan-EU relations including Japanese companies. In that sense, we are grateful for your continuous support and coordination.

Besides, I would like to take the lead in introducing a wide range of Japanese culture.

Although we are still in the middle of the pandemic, I sincerely hope that 2022 will be a good year.