Message from Ambassador of Japan to the European Union 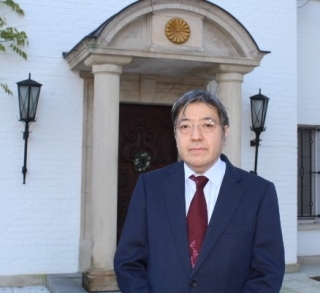 Last year was the year of COVID-19. I believe it was a difficult year full of worries for all of you. I sincerely hope that 2021 will be a wonderful, healthy, and peaceful year for all of us.

I arrived in Brussels about three months ago. Because of COVID-19, it is still difficult for me to carry out my duties as Ambassador in the usual way. However, despite the current circumstances, I have started my activities as Ambassador, sometimes using online tools.

Last year, the COVID-19 pandemic cast a dark shadow worldwide. There are bright signs now, with the introduction of vaccines. However, we still need to keep fighting the virus all over the world.

On the international stage, Japan and the EU have been working together and taking various initiatives on the development of vaccines, working on disseminating vaccines all over the world, and developing medicines. It is important to strengthen cooperation on these urgent issues this year as well.

When the economy is discussed, the negative impact of COVID-19 is obviously also serious. Last year, the EU approved a € 750 billion recovery package, which aims at recovering from the damages caused by the COVID-19 pandemic, and to create a resilient society and economy. Additionally, the EU’s seven year budget, its multiannual financial framework (MFF) of € 1.74 trillion, has also been approved. A total budget of about € 1.8 trillion was approved last year, and the fund will soon be available to use. I would like to express my respect to EU citizens who showed their unity and took an important step in the history of the EU even in the face of an unprecedented crisis.

The Japanese economy has been hit as well, and we are doing our utmost to recover from the crisis. A strong revival of the European economy is also necessary for Japan and the world. Responding to the COVID-19 crisis and achieving economic recovery is a difficult issue for all countries, but Japan and the EU will cooperate in this area as well.

After four and a half years of long and rigorous Brexit negotiations, a new framework on EU-UK relations was reached shortly before last Christmas. Had this not been the case, turmoil would have occurred in various fields, including logistics, and the global economy would have been adversely affected.

Now, as 2021 begins, I would like to give you an outlook for cooperation between Japan and the EU.

These telephone talks confirmed that it is expected that Japan and the EU will play a leading role in the cooperation in various fields, such as the digital field, the environmental field, and climate change.

In the digital field, in the context of the dramatic increase of international data distribution, it is important for relevant countries to continue to hold discussions on “Data Free Flow with Trust (DFFT),” a concept that was launched during the 2019 G20 Ministerial Meeting on Trade and Digital Economy. In order to promote free data flows while securing the “trust” of consumers and businesses in such flows, cooperation between Japan and the EU is important, as well as sharing information with other countries.

In the environmental and climate change fields, Japan is aiming to achieve a carbon-neutral, carbon-free society by 2050, which will reduce greenhouse gas emissions to zero as a whole by 2050. Japan and the EU need to cooperate concretely in this area.

It is not a coincidence that both Japan and the EU have emphasized the digital and the green areas as  top priorities in their policy agendas. It is not a surprise that, throughout history, the sides who share the same values place the highest priority on common issues.

In addition to these global issues, Japan and the EU deepened their mutual understanding and cooperation in various international issues, regional issues, and security issues.

In the international community, geographical distance does not matter. We also discuss the ways to increase connectivity between Asia and Europe. It is important to further collaborate and cooperate on the several issues Japan and the EU are facing, as we both share values of freedom, democracy, multilateralism, and the rule of law.

It will give significance and effectiveness to the Japan-EU Economic Partnership Agreements (EPAs) and the Japan-EU Strategic Partnership Agreement (SPA), which have entered into force almost two years ago. I am convinced that cooperation between Japan and the EU will contribute to peace and prosperity in the international community, even though we are facing challenges to our common values, which have been supported over the past years.

Finally, I would like to once again pray that this year will be a happy year for everyone in Japan, Europe, and the world.