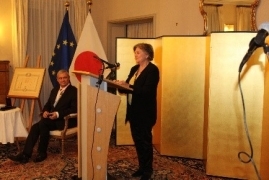 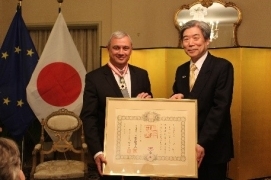 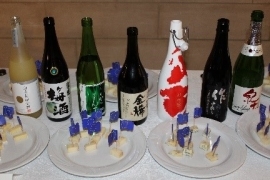 Conferral Ceremony of Decoration on Mr. Pedro Silva Pereira, Vice-President of the European Parliament, followed by a reception

3. In his remarks at the end of the ceremony, Vice-President Silva Pereira stressed the importance of the Japan-EU EPA as extending beyond the domain of trade. He also mentioned the history of exchange between Japan and his native Portugal, which goes as far back as to the 16th century, and his appreciation for having had the opportunity to work, as a Portuguese citizen, to bring the Japan-EU partnership, with a significance of global scale, to a new level of strength.

4. During the reception that followed the ceremony, a “paring experience” of Japanese sake and European cheese was prepared for the guests, as a way to celebrate the 1st anniversary of the Japan-EU EPA. Our guests, including Vice-President Silva Pereira, fully enjoyed this “pairing experience”, which was also appreciated by our guests to the new-year/Japan-EU-EPA-first-anniversary reception, which was held at our mission on January 23rd.